Forking Paths is my ongoing RPG zine spanning a variety of content. In this inaugural issue, a Guidebook to the Viridian Maw!

This 24-page PDF of the digest-sized zine contains fodder for a wilderness sandbox campaign in the Viridian Maw: an overgrown meteor crater, mutated and reshaped by fungal influence. To get a sense of it, check out the free download below for the one-page version of the setting.

Everything is system neutral & stats agnostic, though the material is written with genre assumptions leaning toward D&D/OSR games (but usable for games like Apocalypse World or Dungeon World, too).

The zine’s cover and hexmap are both in color; all other art and illustrations are in B&W. The PDF is in single-page layout format. Need it another way? Let me know!

In order to download this zine you must purchase it at or above the minimum price of $2 USD. You will get access to the following files:

This is something I often want, but rarely find: a writeup of a fantasy place that focuses on the ecology, on the strange plants and animals, and how they interact. It's not a list of monsters and treasures, but more just a wild and crazy place to explore. I can see using it with any number of games.

Forking Paths #1 is a solid black and white zine detailing the ecology around a fantasy wilderness adventuring sandbox.

It's system agnostic, so if you play 5e or OSR, you just need to drop in some mechanics. If you play Into The Odd, you don't even really need to do that.

And if none of the above particularly catches you, still give this a look, because it is extremely well done. There's a level of care that's paid to the ecology of the game area that surprised the heck out of me. Everything featured in Paths #1 feels unquestionably like it's a part of a complex and interrelated web.

The writing is also really strong. Overall it put me in mind of Deep Carbon Observatory---although less for random goofy elements like Observatory's platypus warrior and velociraptor timesquad, and more for how everything feels like it belongs in its place.

There's creatures that serve as a warning system for others, creatures that vitalize the soil, edible plants that cannot be eaten to excess, basically any mechanism that's viable in nature is also present here, with a thorough, adventuring-relevant, and somehow also not excessive description of how it works. There's also an emphasis on symbiosis and cooperation between creatures here, which I think can be underrepresented in monster designs.

Not everything in Paths is dangerous, and there's a mix of neutral/beneficial/hostile creatures that can all be safely encountered with a little bit of knowledge and the right approach. If you're a group that likes Knowledge: Nature checks, this book is probably worth picking up even if you don't intend to set a game in the Viridian Maw ecoregion, since it's a great example of how a little information up front can radically change how the party interacts with a thing in nature.

Probably my favorite creature in the book is the Mosswolf, a single apex hive predator that controls multiple packs of shapeshifting vegetal hounds. It isn't a malign intelligence. It doesn't exist purely to stalk and harry PCs. It's just an enduring hazard of the forest, unkilled because it's difficult to kill---and what animal would bother?

There are a few psychotropic creatures, and one junji ito fungus werewolf, so you may want to omit those depending on the tone of your game, but everything else fits as comfortably in a bright setting as in a grimdark one.

Overall, if you like d20 or OSR, if you like wilderness adventures, or if you like Annihilation or any concept you've seen on a green magic card, this is probably a must-get. It does require you to stat things yourself, so you'll save a bunch of effort running this with a lighter system, but I think even in a crunchy system it's worth the timesink.

Nathan Harrison has a knack for short, evocative writing. The first issue of his wonderful zine is no exception, with a neat little OSR setting which is perfect for both exploration and adventure-oriented adventures.

I especially liked the ruins generator, which does more with a handful of entries than hundreds of pages in other games!

Just had a quick skim, this looks lovely. Well done!

Thanks for checking it out! 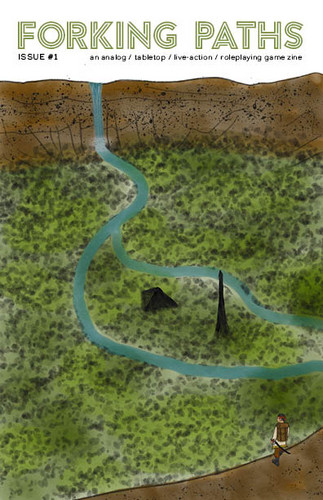 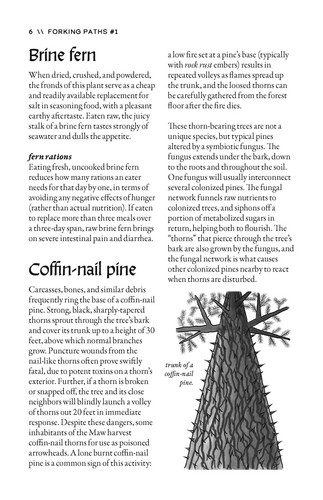 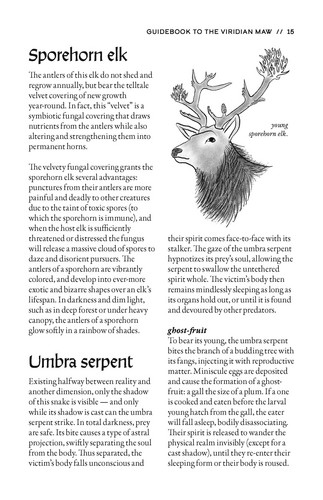